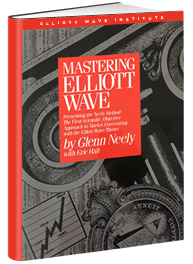 Presenting the Neely Method: The First Scientific, Objective Approach to Market Forecasting with the Elliott Wave Theory by Glenn Neely with Eric Hall

Based on his decades of research, training, and real-time trading, Glenn Neely presented his revolutionary techniques to objectively analyze market conditions in Mastering Elliott Wave. In this unprecedented enhancement of Wave theory, Glenn Neely pioneered a new, comprehensive, and more accurate method to conduct Wave analysis.

Learning Elliott Wave theory – and how to recognize Wave patterns – can be challenging. In addition, orthodox Wave theory often produces market predictions that miss the mark as well as contradictory bearish and bullish scenarios. Step by step, Glenn Neely's Mastering Elliott Wave shows you how to:

"...what a feast of ideas for both novice and experienced Elliotticians! Every sentence is devoted to something important. (Neely) has obviously spent a lot of time on the illustrations to ensure the reader will understand the concepts."
Bruce Babcock
Commodity Traders Consumer Report

"This book will significantly improve your knowledge of proper rule and technique application, no matter what your current level of expertise."
Cycles Magazine
TESTIMONIALS
"I picked up technical methods after losing half my money in mutual funds run by MBAs who are taught what markets 'should' do rather than what they actually do. A coin flip would have yielded better results. Neely sees what no one else does and like a great genius ties it into a code of rules for wave analysis much more strictly than those before him."
- Eric Noel
Canada

"Regarding Mastering Elliott Wave, I must compliment you on your achievement. I found chapters 3, 8 and 11 particularly valuable. I started studying Wave Theory about six months ago, and I needed an overall perspective of the wave count of the market. The structures and the formations in your book provided that perspective. Your forecasts and the direction of the market have been rock solid since I subscribed to your service six months ago. Your structures explain the market behavior better than anyone else."
- A.P.
Canada

"Your book is fantastic. Thanks for all your help."
- Timothy K. Fife
United States

"I have been studying your Mastering Elliott Wave book since it was published, and I believe it is the most complete technical guide to the stock market."
- Anonymous