To the surprise of many traders and Elliott Wave forecasters around the globe, on November 24, 2020, the Dow Jones Industrial Average closed above 30,000 for the first time ever!

However, one trader and Wave forecaster was NOT surprised:
Glenn Neely, founder of NEoWave.

In 1988, Mr. Neely published a 72-year Elliott Wave forecast predicting that the U.S. stock market would continually and exponentially escalate in the coming decades. The current market high indicates that his astounding long-term forecast is still on track! 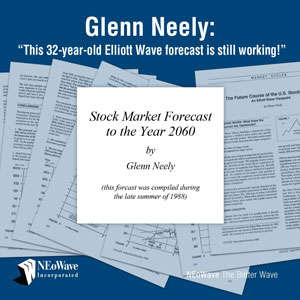 Read Mr. Neely's article, titled "The Future Course of the U.S. Stock Market: An Elliott Wave Viewpoint," which steps through his 72-year stock market forecast. When you read the article, you can track the Dow's progress from 1988 to present day, along with Mr. Neely's forecast all the way to 2060. Mr. Neely published his long-term forecast in the Foundation for the Study of Cycles publication in its September/October 1988 "Elliott Wave" issue, and his shocking prediction sparked global controversy!
CLICK HERE to read the article

In this 10-minute video workshop, Glenn Neely steps through the reasoning behind his long-term forecast. In 1995 - when the Dow was below 5,000 - Mr. Neely presented a workshop where he stepped through the reasoning behind his long-term (72-year) forecast. Thankfully, this workshop was recorded, and you can watch the video! In this video, he notes that the Dow would reach the "astounding" level of 20,000, 30,000 and even higher - a goal that most traders and Elliott Wave analysist considered to be impossible at the time!

What does NEoWave's Glenn Neely say TODAY about his historic long-term forecast?

Mr. Neely noted that his 72-year forecast may be the longest stock market forecast ever published. Plus, he found it interesting that when he recorded the video (noted above) in 1995, the Dow was below 5,000. "At that time, I was calling for a massive Bull market, projecting the Dow should get to 30,000 or higher over many years, and we are there now." He added, "This 32-year-old Elliott Wave forecast is still working!"
Follow us @NEoWaveTheory:
https://www.facebook.com/NEoWaveTheory
https://twitter.com/NEoWaveTheory