Why is it called Neely River?
by Glenn Neely, founder of NEoWave and Neely River Trading technology

Why are markets like rivers? When it comes to comparing markets to the movement of water, it's helpful to look at 2 types of environments:

Understanding the forces at work in a river

Let's say that you're standing next to a lake, and you have five tennis balls in your hands. You throw them up in the air, you freeze time for a minute, and you get the world's most advanced supercomputer to calculate the speed and angle of each ball, the wind direction, and the lake's currents. Your goal is to try to figure out where each tennis ball will end up 15 minutes after it hits the water. Due to all the random factors involved in this activity, there's virtually no way to know where each ball will end up – no matter how sophisticated the computer system. The lake environment produces a lot of randomness that we can't deal with very well.

Suddenly, the lake's east bank is breached! The water breaks through the bank and starts flowing like a river. (Gravity, of course, is the force that gets it moving.) The flowing water creates turbulence as the water rubs against the lake's north and south banks. The water in the middle of the lake, unencumbered, moves the fastest. This creates three zones of behavior in our lake: turbulence at the "top" and "bottom" (the north and south banks) and more directional action near the center.

FIGURE 1: Shows the Forces at Work with three zones of behavior in a river. 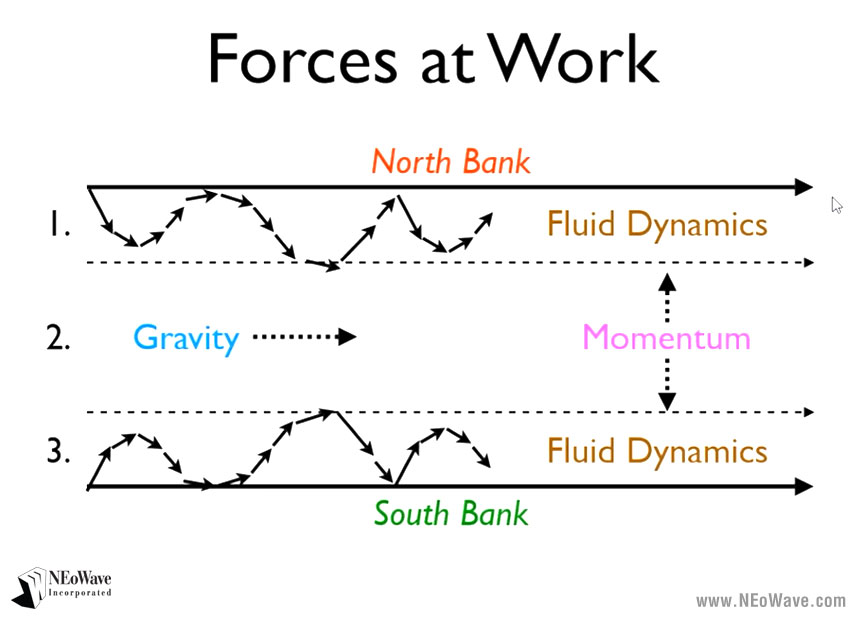 Understanding the forces at work in markets

Markets can exhibit similar kinds of behavior. You can have dead market action with a bit of random behavior and no trending action. Or perhaps a newsworthy event occurs, and markets can zoom up or zoom down. Various opposing forces – lots of different things – can come into play, and you may not be able to predict what's going to happen.

FIGURE 2: Shows the Forces at Work with three zones of behavior in the market. 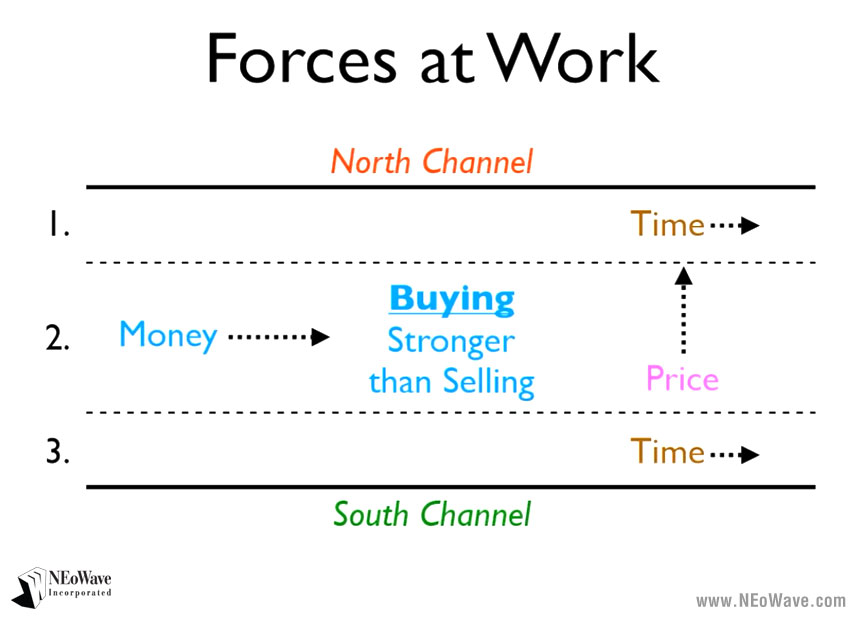 FIGURE 3: Shows the Three Market Zones of money flowing into a market. 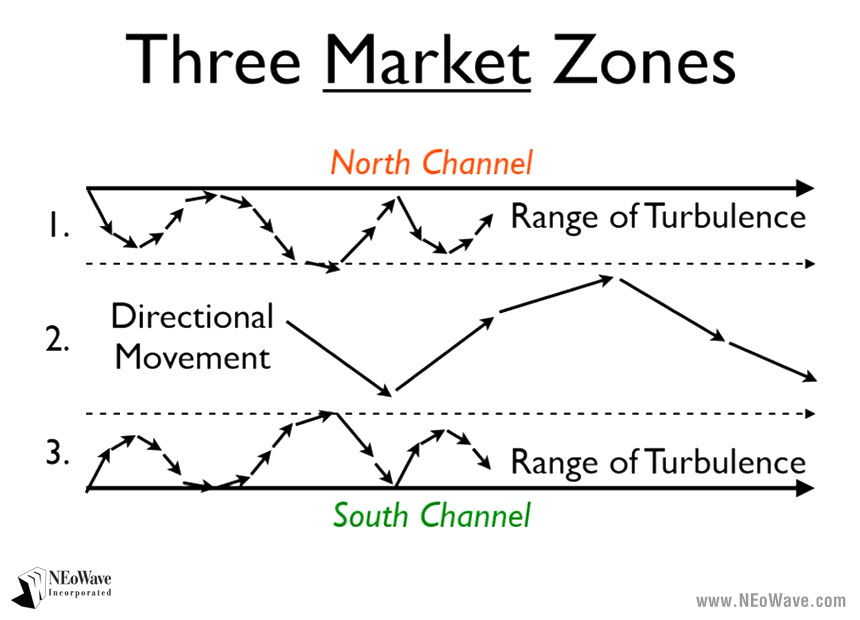 The flowing of the market is similar to the behavior of a river.

During that flowing-in and flowing-out process in a market, you'll see similar kinds of behavior as in a river. As the market advances – goes up or sideways or down – you'll have zones of turbulence that take place near the top and bottom ranges (or channels), and you'll have more directional price action near the middle. (When I teach Neely River Trading technology in my Professional Trading Course, I show traders how to objectively draw these channels.) 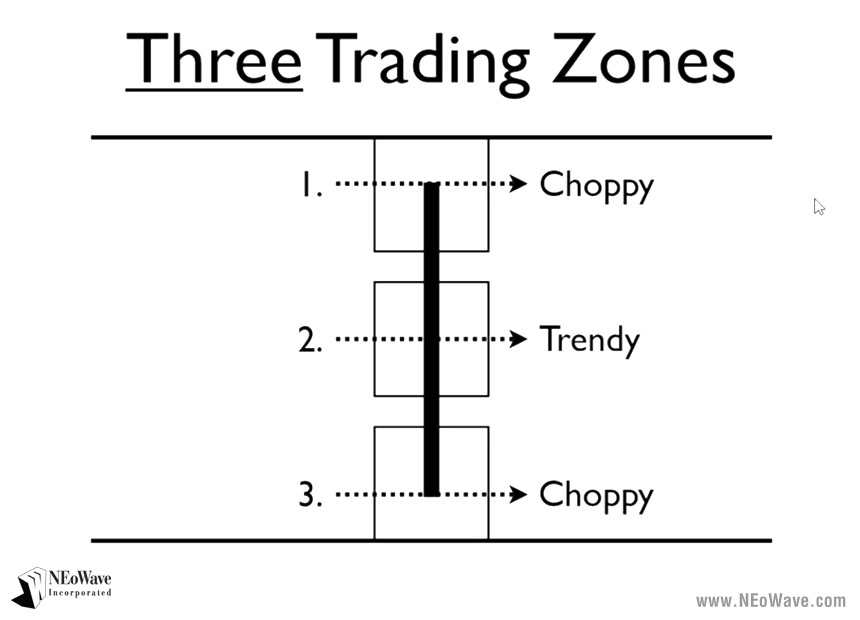 Tracing fish in a river is similar to tracing market actions

Now let's say that you're standing at the edge of a river, and you place a tennis ball in the water. Obviously, it's not going to travel in a straight line. Thanks to fluid dynamics, it's going to chop around and get caught in the turbulence. Eventually, it's likely to break beyond what I call the event horizon, which is generally about 25% between the north and south bank of the river (refer to the orange limit line and green limit line in the "tracing fish in a river" graphic). After the tennis ball passes that point, it starts to accelerate.

FIGURE 5: Shows Tracing Fish in a River with orange and green limit line. 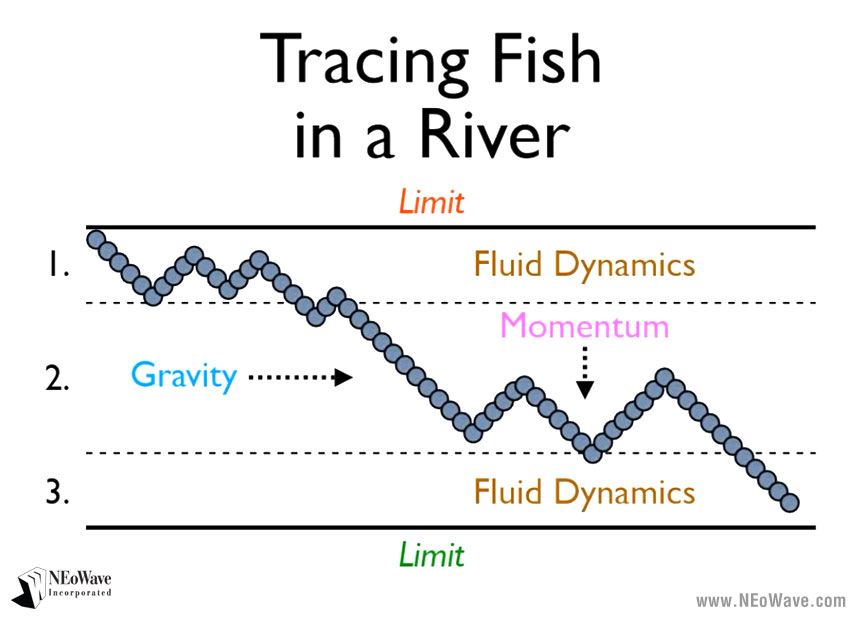 Markets generally fall into two main categories: You have either trending markets or dead markets.

When I realized this phenomenon – specifically, how market action mirrored river action – this put me on the path to develop Neely River Trading technology. It was almost a eureka kind of moment for me. I started to realize that I was onto something because of this connection. 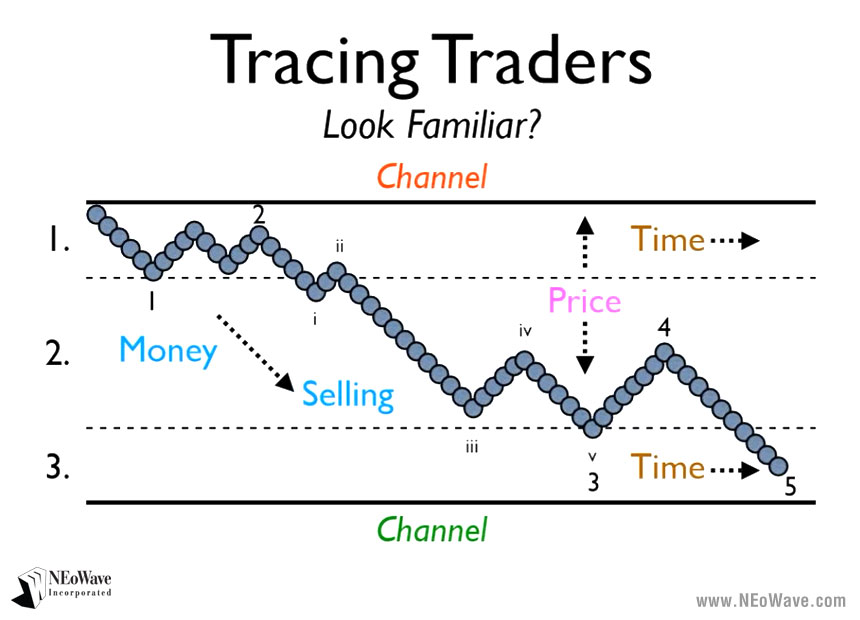 How does Neely River Trading work in the real world?

Let's take a look at a real-world example, so you can see the behavior I'm talking about. Keep in mind that no channel is going to be perfectly horizontal, because they can go up, down, or sideways. They can expand or contract. But the fundamental behavior remains the same, as long as you know how to draw the channels. 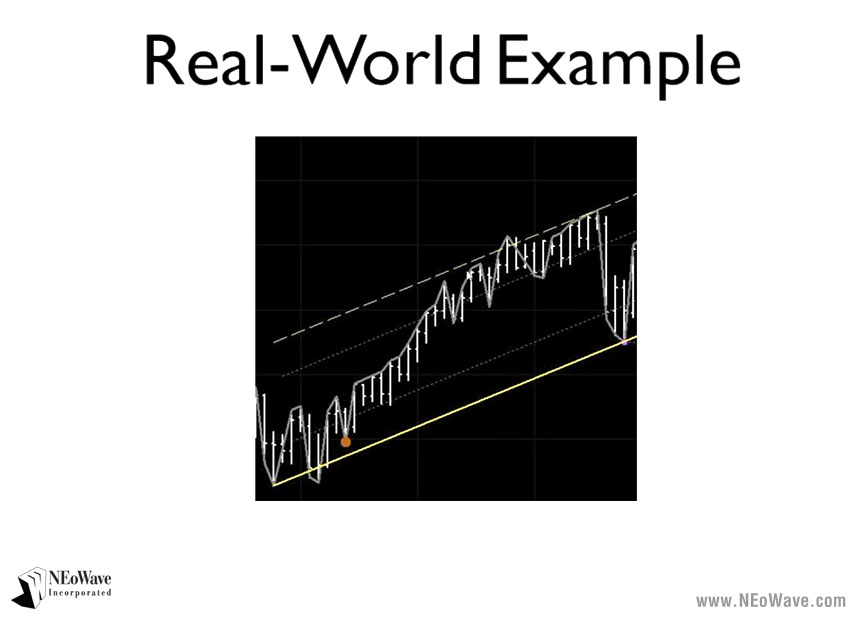 In this case, the channel was going up at about a 45-degree angle. And you can see the choppiness that took place near the bottom-left of the channel, then it started to accelerate in the middle, then it started to chop up at the upper end of the range (top of chart). Most people wouldn't consider this to be choppy or turbulent action, because it's continuing to go up. But when the channel is placed properly, you can see – from a river perspective – that the top is the turbulent zone. So is the bottom-left. The middle area is the acceleration zone. Then the price dropped quickly (far-right portion of chart) and started chopping around again a bit more.

The connection between river behavior and market behavior is there – if you know where to look!

This short article gives you an idea of the connection between river behavior and market behavior. This is a quick, general overview. To learn more, take advantage of our free resources to gain a deeper understanding of Neely River Trading technology – and how it can help you become a better trader.

Where do I start learning Neely River Trading?

First, sign up for the NEELY RIVER Professional Trading Course. The professional Trading Course is taught by author and financial analyst, Glenn Neely and is based on his Neely River Trading technology. The goal of the course is to improve an individual's trading skill and set them up for successful trading. The class meets every week for 12 weeks via conference call with screen-sharing. At the end of each class, students have plenty of time for Questions and Answers with Mr. Neely.

Courses are available throughout the year. Learn more and enroll today! 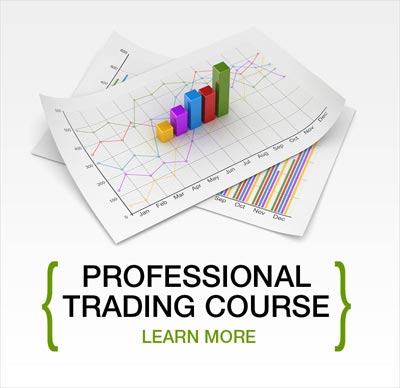 Want Neely River Trading to work for you?
Subscribe to the TRADING service - As low as $30/month

View a sample of the newsletter: 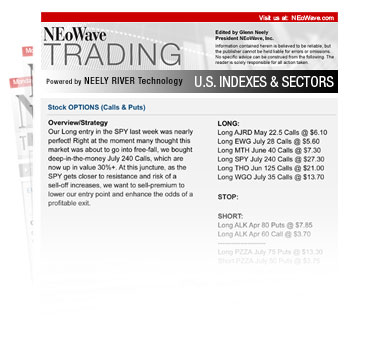 "Neely River Trading has had a huge impact on my portfolio's performance. I am now managing money with a confidence I never had before." James W. V., Financial Planner, United States

"My trading is based on Neely River Theory. This year I will end with a 50% return." Manish K., India

"I've made trades I never would have normally made, and I have made money, thanks to you. Now I have a trading tool that gives me a great deal of confidence in the market." Mark G., Australia