Hear Neely expound on his April 2013 prediction: "Gold's bull market is over, and a multi-year bear market has begun"

September 11, 2013 - In a new interview, internationally known trading and forecasting advisor Glenn Neely, founder of NEoWave, Inc., expounds on his April 2013 forecast that a multi-year bear market had begun. In this thought-provoking discussion, Neely addresses this ongoing bear market and rollercoaster ride that leaves "Gold-bugs" shocked and confused following massive declines and recoveries. "There are more - and larger - declines to come," he warns.

Neely began warning his NEoWave Trading service subscribers of Gold's impending bear market as early as autumn 2011. Then on April 12, 2013, he instructed Gold subscribers to short the precious metal (it was down approximately $60 at the close). On April 15, he alerted all NEoWave clients: "Based on its decline the last few days, there is no doubt Gold's bull market is OVER. Just today, Gold was down more than $100/ounce at one point! Such a hyper-collapse only occurs at the start of a major (probably multi-decade) downtrend." Within two trading days of his April 12 recommended short, Gold had dropped another $180. Thankfully, Mr. Neely's NEoWave Trading service customers avoided being long Gold, plus many actually profited from the decline. In a recorded interview on April 18, 2013, Mr. Neely publicly announced: "It's official - on February 5, 2013, Gold began a new, multi-year bear market."

In this new interview, recorded in August 2013, Neely discusses the continuation of Gold's ongoing bear market. He notes that, since the early 1970s, Gold experienced a surging, four-decade bull market. And he presents Gold's new reality: a prolonged bear market, with a significant drop, expected over the next 2 to 4 years. How is this possible? Neely's wide-ranging discussion touches on the Federal Reserve, the Mandrake Principle, global economies, and the consequences of a decades-long credit expansion around the world. Given these global influences, Neely shares his prediction for the scale and timeframe of Gold's downtrend.
Click to hear this 35-minute interview with Glenn Neely and view charts. 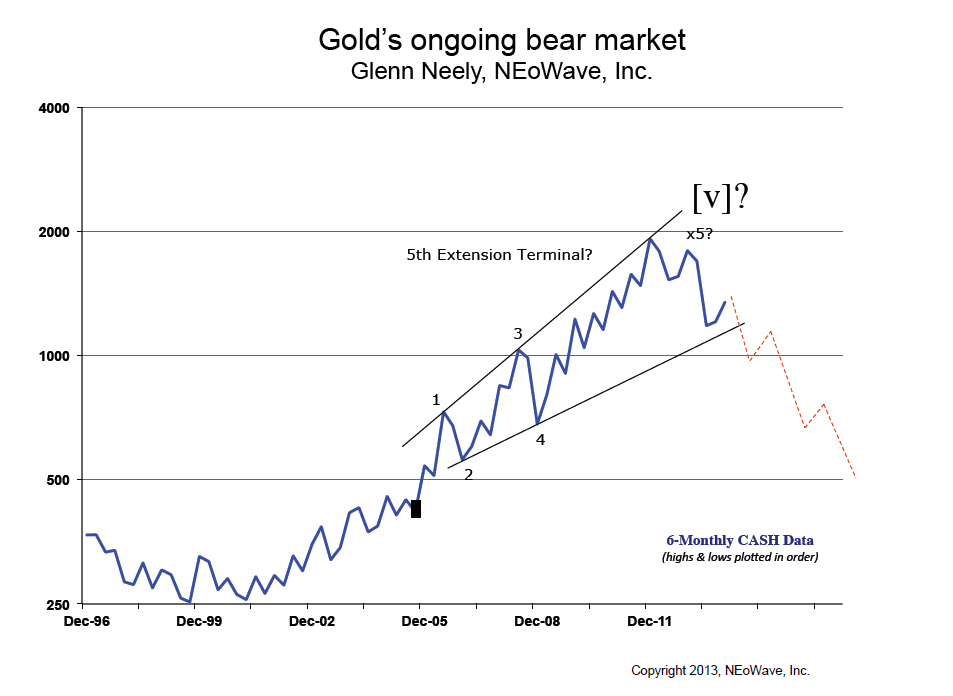 About Glenn Neely and NEoWave, Inc.

To learn more about Glenn Neely and the NEoWave Forecasting and Trading Services visit the NEoWave website.