NEoWave's Glenn Neely predicts Gold will break $1,000/ounce in 6 months or less - and continue to plummet

August 5, 2015 – Throughout 2011, in which Gold eventually topped at $1,920/ounce, NEoWave’s Glenn Neely was warning of an imminent Bear market. Eighteen months later, on February 5, 2013, (see chart below) Neely proclaimed Gold’s Bull market was “officially” over and had begun a multi-year decline. Just recently, the Gold market broke below $1,100/ounce (more than $800 off its all-time high). According to Glenn Neely, Gold will easily break $1,000/ounce in the next 6 months or less – and potentially plummet below $800 in the next few years. 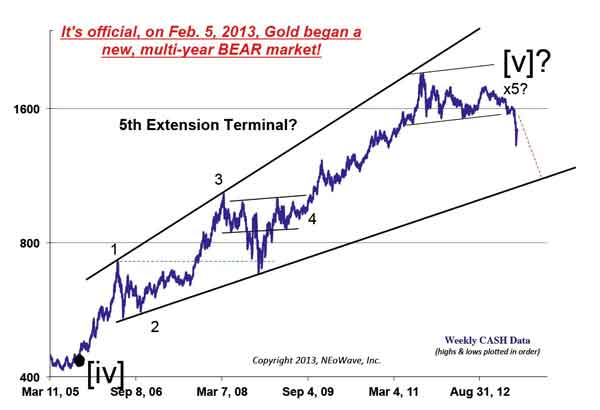 In the first half of 2015, Timer Digest has repeatedly recognized trading advisor Glenn Neely as a Top Timer for the Gold market – and identified Neely as a contender for Gold Timer of the Year in its mid-year report. In fact, for the last 20 years, NEoWave’s Glenn Neely has ranked as a Top Timer for Gold, the S&P, and Bonds over 100 times! Click to view complete results.

To learn more about Glenn Neely and the NEoWave Trading and Forecasting Services visit the NEoWave website.